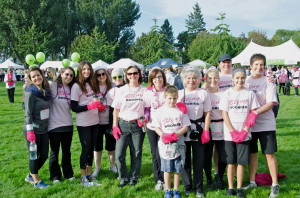 Our European Goldsmith team “Bling for Boobies” was out and running on October 6th for CIBC’s Run for the Cure, in downtown Kelowna. We were a team of 14 with 6 staff participating and 8 supporters! We had 3 staff minding the store wearing the t-shirts and all so the rest of us could participate in the run, which was a huge help! Next year we are aiming to get together a team of at least 30 people. Overall there were more than 2000 people there to participate and volunteer their time to a truly awesome cause. It was a little chilly in the morning and majority of people, ourselves included were nicely layered. But in true Kelowna fashion the sun decided to make an appearance and warm the day. It turned out to be just beautiful! Our team decided to do the 5KM walk which took about an hours time, once we crossed the finish line there were local apples, bananas, bagels, yogurt and hotdogs for the participants and volunteers to enjoy. Awards were given out to the teams who raised the most money, and the breast cancer survivors were honoured during a special ceremony. It was an amazing day and an amazing event. We are so happy we were able to take part in CIBC’s Run for the Cure, and can’t wait to get out there again next year, with an even bigger team!