From now through January 2014, we are running our first ever Sweetheart Proposal Contest!  You, the reader, are going to hear stories about real proposals, and all from people we know and love!  We want to share them with you in hopes that you will share your proposal story with us. We will be collecting proposal stories over the next 3 months from our readers and facebook fans. The winner will be announced on Valentine’s Day.  (That’s Feb.14, for all you guys that don’t know!)

So what’s in it for you? Our favorite proposal stories will be featured on our blog and Facebook.  Our favourite story will receive a $100 European Goldsmith gift card to spend any way you choose! So tell your friends and family and send in your proposal story!  If you like, include a picture of your ring(s) or an engagement or wedding photo too.

So, our first story…let me tell you about our own European Goldsmith couple, Lila and Landon. 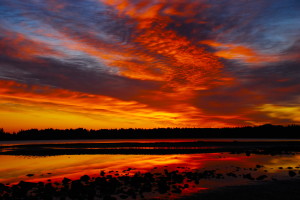 It was October 23rd, 2009 and Landon and Lila were on their way to Vancouver Island to celebrate seven years together.  Lila had been sending hints to Landon for the last few months about marriage and was hopeful that this would be the weekend he would pop the question.  Then she could finally pull out her “secret” wedding binder that was hidden under their living room couch and plan her dream wedding…in plain sight.  Landon and Lila arrived at their destination by the late afternoon; they had rented a condo for the weekend that over looked the ocean and was only steps away from the beach.  Upon arrival, Lila was sad to see that the tide was right up to the steps  so walking along the beach was out of the question. Landon cooked dinner and they cozied up on the couch in front of the fireplace before calling it a night.

The following morning Lila had awaken early for her 5 am bathroom break.  On her way back from the bathroom she paused to look out at the ocean. A huge grin crept up on her face, the tide was out…Way out!  It was time!  Time to pull on the boots, jacket and hat and collect sea shells!  Suddenly awake she ran into the bedroom to wake her sleeping bear.  Groggy and not at all in the right frame of mind to do what he was about to do, Landon chucked on what ever he could grab first, then announced “I’m going to the bathroom!”  Although it was a normal thing to do in the morning, Lila thought it odd that he felt the need to announce his morning actions.  What Lila couldn’t see was Landon in the bathroom giving himself a pep talk and struggling to pull the ring box out of his hiding spot in his toiletry bag. This was not how he had planned on doing this.  It was meant to be sunset, not sunrise!  He was supposed to have the entire day to sweat!

Five minutes later they were out the door and walking onto the beach.  The air was crisp, the sun was just coming up, and there was no one in sight for miles.  It was a perfect morning.  After walking out a ways hand in hand, Landon turned to Lila and dropped down on one knee.  This was it.  This was the moment she had been waiting for!  He opened up a ring box and started saying what was probably heart felt and romantic but all Lila could do was spurt out “YES!”  He put the ring on her finger and they watched the sunrise together on the beach.  It was the most beautiful morning either of them had ever experienced.  It couldn’t have been more perfect.

The following October, Lila and Landon were wed in their hometown surrounded by family and friends. They just celebrated their 3rd anniversary. 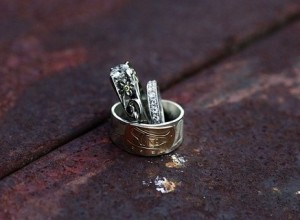 Now that you have heard one of our stories, we want to hear yours! Message us on our Facebook page or e-mail your story to sales@europeangoldsmith.com.   You have until January 31st to submit your entry!