The Jewellery of Gatsby

“Gatsby…What Gatsby?” I knew there was something special about this movie the first time I saw it back in theatre when it was first released in May. Was it the amazing cinematography? The classic story line? The seemingly carefree lifestyle that the characters lived surrounded by all things beautiful? Was it the lavish parties, the over indulgence, the flapper dresses and the jazz? Or was it the fact that Leonardo DiCaprio and Carey Mulligan delivered Oscar worthy performances? Maybe it was all of the above, but something was missing. You could imagine my excitement when the film was released on Apple TV and I got to sit down and watch it all over again. It wasn’t until the scene when we first meet Daisy Buchanan that I know what is so special about this movie.  The first thing we the viewers see isn’t her face, but instead her hand as it pops up from behind the couch. On her ring finger, every so precariously, sits one of the most beautiful and classic rings I have ever seen. Now remember that The Great Gatsby was written and is set in the 1920’s, which right there tells me that the jewellery designs from this era are truly timeless. It’s the classic cushion cut diamond with halo and micro pave set diamonds, one of the most popular engagement ring styles today!  As the film went on I could tell that the director Baz Lurhmann and costume designer Catherine Martin had paid extra attention to the jewellery, a style that we now know as Art Deco.

Art Deco was the innovative design style from the 1920’s to the 1930’s, the sleek intricate work with geometric shapes and natural lines showcased the look of modernism, elegance and sophistication. The fashions of the twenties called for new and different fashion accessories. The low cut necklines on the dress styles and shorter sleeves provided the opportunity to showcase jewellery around the necks and wrists.  Head bands, clips and pins also became popular, decorated with semi precious stones and feathers.  Jewellery materials ranged from new plastics such as bakelite, or catalin, to rubies, sapphires gold and platinum. Platinum was all the rage, as it enhanced the beautiful diamonds and because of its popularity white gold also became a popular metal due to its similar appearance. Semi precious stones that were used included, pearl,coral, jade, aquamarine, citrine, onyx, opal and lapis lazuli.

In the film we see all forms of the 1902’s Art Deco pieces, not only what would be the monstrously expensive pieces but we are also shown what a more middle class woman might have worn. This is when Tom Buchanan takes his mistress and acquaintances into town to his secret apartment. Here we get to see what is known as bakelite or catalin jewellery. Its larger and chunkier with bright bold colors of green, red, orange and yellow. Bangles line the wrists, and chunky necklaces fall around the neck. Again this is a style that has never really gone out of fashion. One of my favourite scenes from the movie is a flash back of Daisy just before her wedding to Tom Buchanan, in drunken pre-nuptual despair she tears off the pearl strand Tom gave her as a wedding gift, which we are told is worth $325,000. After reading a few articles on the movie I had found out that that particular scene had a few re-takes and that there were feet of pearl strands kicking around with people lying under the bed throwing out extra pearls to give the scene a more dramatic effect. 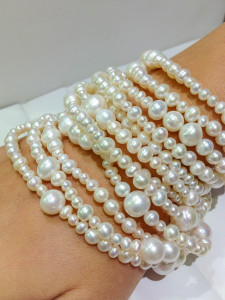 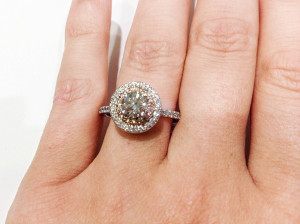 “So where did all this jewellery come from?” I asked myself. There was no possible way that this jewellery I was seeing in the film was costume, it was so rich looking, so elegant. It took only a minute of searching on-line to find out where this jaw dropping jewellery had come from. It was no surprise when Tiffany&Co. appeared on my search engine page. Tiffany&Co. was the ideal partner to work with Lurhmann and costume designer Catherine Martin, not only where they able to pull design ideas from the Tiffany archive, but on further investigation actually found correspondence between the Tiffany jeweller at the time and F. Scott Fitzgerald, author of the great Gatsby.  It was a match made in heaven!  Back in late April of 2013, Tiffany&Co. debuted the Gatsby collection in anticipation of the films May release date. Jon King executive vice president of T&Co. said in a statement “The jewellery symbolizes the story’s themes of wealth and privilege and we approached its design with the utmost style and luxury in mind.” And create style and luxury they did, with pieces ranging from $550, the ‘daisy ring’ to the show stopper Savoy head piece at whooping $200,000, all the way up to $875,00 for the daisy diamond ring with a 5.25 ct. centre. Glamour and sparkle is something the Great Gatsby wasn’t lacking.

Since the films release date back in May, it’s no wonder the fashion styles from the 20’s are making a roaring come back.

See jewellery from the film here!