Emerald – The May Birthstone

Happy birthday to all the May babies out there!   While we are all enjoying watching the world around us emerge into summer in all its green glory, this month’s birthstone follows suit.  May’s birthstone is the the beautiful precious gem called Emerald.  Also, if you are celebrating a 20th or 35th wedding anniversary this year, you just might find yourself with a new stunning piece of emerald jewellery!

Emerald is the most precious stone in the beryl group of gemstones.  An emerald is any medium to dark green beryl, given that coloured by chromium.  The rich green colour of an emerald is unlike any other stone and is regarded as one of the four most precious gem stones -the other three being ruby, sapphire and (of course) diamond.  Even though emeralds are one of the most precious gemstones, they are often heavily included (lots of inclusions/flaws) and therefore susceptible to breakage.  Almost all emeralds have visible inclusions and, because of this, nearly all emeralds are treated with oil or resin to fill in the small fissures and cracks.  Artificial lighting will amplify inclusions and fractures that prove the stone to be a natural emerald. 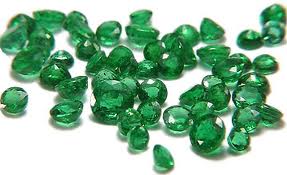 Emeralds are mined from many locations around the world including Colombia, South America, Europe, Brazil, Zambia, Afghanistan, Australia, Ghana, India, Madagascar, Malawi, Mozambique, Nigeria, Pakistan, Tanzania, and the United States.  Colombia has been the most famous emerald source due to the deep green colour that occurs in a majority of the emeralds found here.  Brazilian emeralds are prized for their excellent clarity and slightly yellowish green colour.  While Zambian emeralds are desired for their slightly bluish green colour.

Emeralds have a glass-like lustre when cut and polished. Though their clarity can occur from translucent to opaque, transparent gems are the most desirable and a lot more valuable.  Clarity is important, but inclusions are tolerated more in emeralds than any other gem. Unlike other beryl stones, emeralds often contain inclusions and other flaws. These flaws are not looked at as negative characteristics for emeralds, as they would be for other gemstones.  Instead, these flaws are considered part of the character of the stone and are used to assure the consumer the stone is natural.  Emerald clarity is graded by eye, unlike a diamond, where 10x loupe magnification is used to grade clarity. If an emerald has no inclusions that are visible to the naked eye, it is categorized as flawless. “Eye-clean” stones are the most expensive, especially those with ideal colour grade. 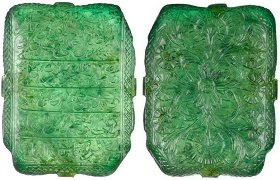 One of the worlds largest emeralds is the ‘Mogul Emerald’ which dates from 1695 and weighs 217 carats and it 10cm tall!  One side of the gem is inscribed with prayer texts, with the other side having floral engraving.  This legendary emerald was auctioned by Christie’s of London to an unidentified buyer for 2.2 million on September 28th, 2001.  Another famous emerald is the ‘Patricia’, one of the largest Colombian emerald crystals weighing 632 carats. 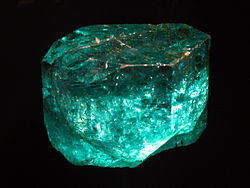 The Gachala Emerald is one of the largest gem emeralds in the world, at 858 carats (171.6 g). This stone was found in 1967 at La Vega de San Juan mine in Gachalá, Colombia. It is housed at the National Museum of Natural History of the Smithsonian Institution in Washington, D.C.