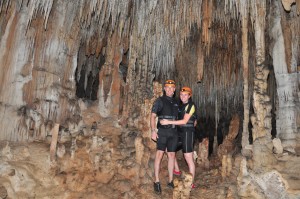 That is exactly what happened this October, a couple in love walked into European Goldsmith in hopes to find the PERFECT diamond engagement ring.  The search began as they looked over many different unique stylings.  Suddenly it hit!  It was absolutely stunning, the ring she had been dreaming of, the ring that seemed to fit like no other, the ring that made her heart melt, and her eyes water.  This was is, and Troy knew it.

It took careful planning on Troy’s and European Goldsmith’s part to keep it a secret for nearly a month.  Theresa LOVED this ring and was in frequently to visit it, try it on, admire and show her closest girl friends and family.  Troy had the most perfect, romantic proposal that he wanted to execute, but it wouldn’t be until the end of November and it was only October!

Not only did Troy choose to purchase his beautiful bride to be, the ring she was dreaming of, but he took the liberty of upgrading the diamond to hold the most beautiful and rare diamonds available.  Forevermark, and this is where our story begins.

It all started with the help of John and Kim at European Goldsmith. The time, care and attention they gave Theresa (my now fiancé) and I when choosing a ring was exceptional.  Once we had an idea of what we liked, I sorted out the details of the ring with Kim, all while giving Theresa the impression that we were still looking.  Even after I had the ring, Theresa and I would go back to European Goldsmith from time to time to see what was new and if anything else caught her eye.  I just got Kim to play along.

When I picked the ring up, it was stunning.  I had decided to upgrade the center diamond in the ring with a Forevermark, which completely transformed an already beautiful ring into an awe-inspiring, eye-catching show piece.

Now came the questions of when and how to propose.  With a Caribbean Cruise booked for the end of November, It was the perfect opportunity.  In the port of Cozumel, we planned an excursion to Playa del Carmen where we would enter into an underground network of caves known to the Maya as Xibalba, or “place of fear.” Ruled be the Maya Death Gods, it is here where I decided to pop the question! 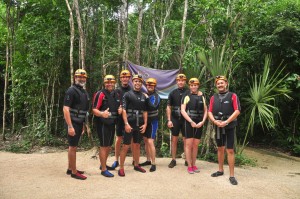 With the ring stashed in my hard case wallet which was in the zippered pocket of my shorts, I was ready!  But then it got complicated! We had to put wetsuits on!  We all geared up and the ring was officially trapped!  As we hiked through the jungle with our small, guided party towards the entrance of the underworld, anxiety was setting in.  I strategically placed myself at the back of the group so that I could begin the struggle of somehow retrieving the ring.  I tugged and reefed on the right leg of the wetsuit until it was up to my groin, then tugged and reefed down on the right ride of my shorts until I had access to the back zippered pocket.  I lagged behind the group at times and got yelled at by Theresa to hurry up and quit screwing around all while the photographer that was following the group took pictures of me at stunned and awkward moments.  I was stressing, but Theresa hadn’t caught on! 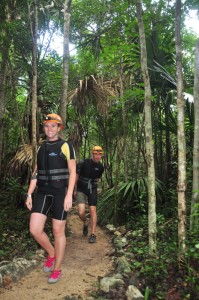 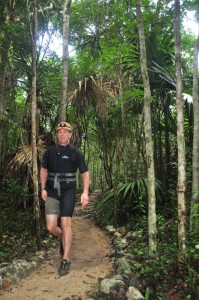 We entered the caves, but the struggle wasn’t over!  Now on top of the difficult task of accessing the ring, I had to do it in minimal to no light while traversing through an aggressive terrain of stalagmites, stalactites and sections of the tour in which we had to swim with blind eels lurking in the depths!  This “place of fear” was living up to its reputation. 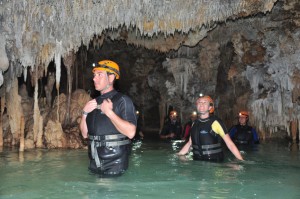 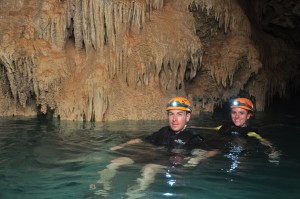 After all of that, I managed to retrieve the wallet that the ring was in and placed it between my skin and the wetsuit where it would hopefully remain undetected, yet accessible.  As we progressed through the network of caves, the guide stopped the tour so the photographer could take still photos of the various groups.  When it was time for Theresa and I to have our picture taken, it was the perfect opportunity to catch her off guard by getting down on my knee and proposing to her just as the photographer was taking the photo…but I chickened out the first time!  I was nervous, so we got a good picture and carried on.  It wasn’t until the second time that we stopped to take pictures that I seized the moment, got down on one knee and proposed.  I caught not only her, but everybody off guard.  She said yes, of course! Who could say no to a Forevermark!?  We got some great photos and The Maya Death Gods showed their mercy that day, as they allowed us to leave not only with our lives, but the beginning of a new one as life long partners. 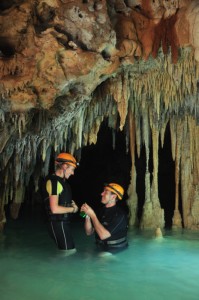 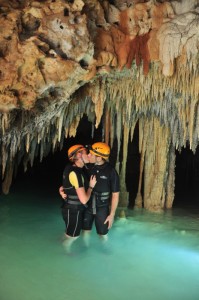 What a romantic Forevermark proposal story!  A huge thank you to Troy and Theresa for sharing such a heart warming and fun proposal story and photos! 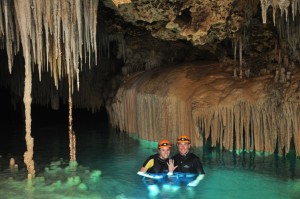