What is a Claddagh ring anyways?  What does it mean?  What does it represent?  Knowing very little history about the ring, other than the origins being Irish, I thought it might be interesting to research the famed Claddagh ring that has been popular in jewellery for many, many years.  Not to mention that St.Patrick’s Day is this month, it seemed all too fitting a subject.

I have known the Claddagh ring strictly by design; two hands holding a heart with crown on the heart.  It is given to a loved one representing if a man or woman was taken or single.  But to what is the history on this interesting ring?

The Claggagh ring, as it is presently know, was first made in the 17th century.  It is a traditional Irish ring representing, friendship, love and loyalty.   The hands represent friendship, the heart represents love, and the crown represents loyalty.  The design and customs related with this ring, came from an Irish fishing village of Claggagh, which was located outside the old city walls of Galway, and is now part of Galway City.  Although Galway had been producing the iconic ring since at least the 1700’s, it wasn’t until the 1840’s that the name Claddagh ring was introduced to this particular design of jewellery.

One of the first documented goldsmiths to produce the Claddagh ring was Irish goldsmith Bartholomew Fallon.  Fallon was based in Galway, and made these rings until circa 1700 when he retired from goldsmithing.  His rings are among the oldest surviving examples of the Claddagh ring, in many cases bearing his signature.

As the ring’s history is quite old, it is of no surprise that there are many legends about the origins of the ring, one of which are about a silversmith, Richard Joyce from Galway, circa 1700.  It is Richard Joyce who is said to have created the Claddagh design as we know it today.  As legend has it, Joyce was captured and enslaved by Algerian Pirates around 1675 while on a passage to the West Indies.  Once captured he was sold into slavery.  As luck would have it, Joyce was bought by a Moorish goldsmith who taught him the art of his craft.  After fourteen long years, and priceless goldsmithing knowledge, Joyce was finally released from his captivity.  King William III had sent an ambassador to Algeria to demand the release of any and all British subjects who were enslaved in the country.  All Joyce had to return to Galway with were the clothes on his back, and the ring he had made while in captivity; it is this ring that we have come to know as the Claddagh ring.  After several years, he gave the ring to sweetheart, married, and became a goldsmith with much success.

It is believed because Joyce was captured and learned the art of goldsmithing, the Claddagh design started it’s popularity.  An account written in 1906 claimed that the Claddagh ring was worn in the Aran Isles, Connemara and beyond. Knowledge of the ring and its customs spread within the British Isles during the Victorian period, and this is when its name became established.  Galway jewellers began to market it beyond the local area in the 19th century, and now it is known worldwide. 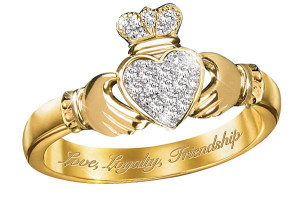 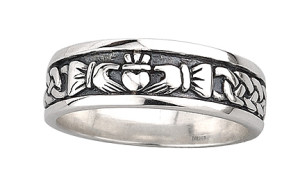 Claddagh rings today are often used as friendship rings, but are most commonly used as engagement or weddings rings.  Mothers also give these rings to daughters when they turn 16.  When the hands that hold the heart are angled towards the wearer, that means he or she is “taken”.  When the heart faces out, the wearer is single.  This has become common largely due to the sentimental saying:  “This is my heart which I give to you crowned with my love.”  Also associated with the ring is this wish:  “Let love and friendship reign.”  According to Irish author Colin Murphy, the way in which a Claddagh ring is worn conveys the wearer’s relationship status:

Towards the end of the 20th century there was an explosion of interest in the Claddagh ring, both as jewellery and as an icon of Irishness that you can now see on many other objects from pub signs to grave stones.  In more recent years it has been embellished with interlace designs, combined with other Celtic and Irish symbols, as well as diamonds and gemstones.  Today the Claddagh design can be found not only in it’s traditional rings design, but wedding bands, pendants, earrings, even bracelets. 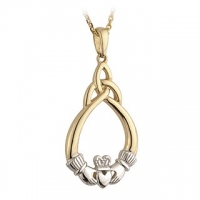 So whether you give a piece of Claddagh jewellery to a friend, a daughter, or a lover, know that there is great symbolism associated with the design, and that you do not have to be Irish to enjoy it.